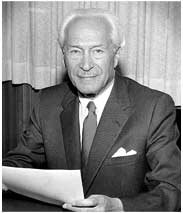 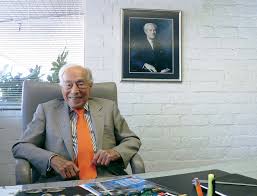 International Rectifier co- founder, Eric Lidow in the office he worked in for over 60 years (in front of the portrait of his father, Leon)

In 1937, 24-year old student Eric Lidow graduated in photovoltaics at the Technical University of Berlin, Germany – the worst place to be for a young Jew at that time. Thus the junior engineer originating from Vilnius/Lithuania wisely immigrates to the United States, although he has only $14 in cash and no command of the English language. His talent of speaking five languages (other than English) as well as his graduation in engineering is initially of little help to him when looking for a job. However, having eked out a living by washing dishes, he eventually establishes a company in 1947 that will eventually become a world leader and have a market capitalization in excess of $3bn.

In an industry where companies usually exist for less than 40 years, International Rectifier was a leading power management technology company for 68 years until being acquired on January 13th, 2015. No other enterprise has given so much direction to the power electronics technology as International Rectifier (IRF), its critical developments having been e.g. selenium rectifiers, germanium rectifiers, selenium photo electric cells, silicon diodes, Zener diodes, and – highly important – the HEXFET-Power-MOSFET. Introduced to the market in 1979, the latter became a serious competitive product to the bipolar power transistor. The industry discovered the technical advantages of this special innovation very quickly and utilized the new high-performance MOSFET designed in a hexagonal cell structure. From that time on, energy use became even more efficient.

Imagine you want to drink a glass of water “, says Alexander Lidow, International Rectifier’s former CEO, “but you are only able to fill that glass at a fire hydrant. How much water will be lost in that case?  This has been the situation from the beginning of electronic engineering. By developing our HEXFET-Power-MOSFET, you are now able to fill the water into the glass in drops without any waste.”  With today’s multi-faceted range of products, the son of the company’s founder intends to furnish energy-saving electronic components to all industries and especially to electronic motion control, a sector dealing most wastefully with this scarce resource.

From Vilnius to New York: A Start with Obstacles

His roots go back to Czarist Russia:

Born in 1912, Alexander Lidow’s father, Eric Lidow, was born in Vilnius, today’s capital city of Lithuania. At that time Vilnius was under Russian regime. Because Eric’s father, Leon Lidow, signed into the Russian army, the Jewish family moved to Russia. Nine years later they finally went back to Vilnius which had become Polish in the meantime.

In his native city, Eric then attended high school and became interested in engineering for the first time.

“Most of my friends wanted to become wealthy lawyers, medical doctors, or businessmen”, Eric Lidow,  chairman of the board at International Rectifier located at El Segundo, California, recalls. After having graduated from High School in 1931, Eric Lidow left his native town to enroll for engineering at the Technical University of Berlin with a focus on photovoltaics. His parents supported his decision although they only had a vague conception of an electrical engineer.

Eric Lidow, co-founder and former chairman of International Rectifier on the cover the pictorial memoir book “One Hundred Years” by Alex and Veronica Lidow

After graduation in Berlin in 1937, the possibilities to receive further education under the Nazi dictatorship, the main objective of which (namely to prepare for a war) already was in full swing, became more and more limited. Access to technical literature, for example, suddenly was denied to foreign students. In consideration of all those dwindling possibilities, Eric Lidow finally immigrated to New York.  “When I arrived, I had to my name 14 dollars in cash and wasn’t able to speak a single word in English. But if you want to survive, you have to learn the country’s language.”

Neither his otherwise great virtuosity in foreign languages nor his graduation in engineering aided him in looking for a job. A turn for the good took place when he got a job as a translator for important German visitors at Automatic Winding (a coil manufacturer) in May 1938. In that job he perfected his command of the English language. Impressed by Eric Lidow’s skills, the company’s chairman offered him a management position in which Eric Lidow initially was responsible for nine employees and later on had 120 people reporting to him.

But the young immigrant believed in his unemployed engineering talents and eventually invested $34 out of his savings in an application for a job as a photovoltaic expert, resulting in his first promising employment at Universal Studios, Hollywood, for the development of photo-electrical equipment for film re-production. However, before he was able to take on that job the responsible manager died. But his journey to Los Angeles was not in vain because a Universal employee lent Eric Lidow the sum of $2000 as seed money to establish his own business for the development of photo-electrical cells. With such money, he founded the Selenium Corporation of America in 1940.

Selenium Corp. initially developed selenium cells for exposure meters, but the market collapsed during World War II. Henceforth Selenium produced novel rectifiers; however, Eric Lidow did not know that these rectifiers were used as a bomb fuse. At that time Selenium had 200 employees. Eric Lidow recognized that this enterprise imposed personal consequences on him. While his partners sold their Selenium shares to a company known as Sperry Corporation in 1944, Eric Lidow maintained his share in the capital and, as a consequence, became an employee of Sperry. In August 1947, however, Eric Lidow finally also sold his shares to Sperry and founded a new company under the name of International Rectifier together with his father, Leon Lidow, who escaped from the European Nazi holocaust a short time before. 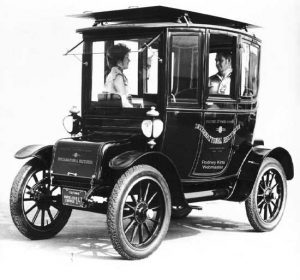 Shortly after the start-up at Inglewood near Los Angeles, the company’s principle place of business was relocated to near-by El Segundo, where it was located until 2015.

Leon and Eric Lidow had always developed products which were different to those of Sperry Corp., the market focus being on the heavy industry and high power sectors. Power components such as the selenium plate rectifiers already mentioned above were developed by the company for applications in electro-plating and mining operations, followed by power management applications such as accumulator charging systems for cars. In 1960 IRF presented the first solar-powered electric vehicle based on a Baker 1912. Its solar top consisted of 10,460 individual solar cells, constituting power management in its pure form.

“Over the course of one century, electricity has become an essential part of our life”, Alexander Lidow states today, “more than one half of the electric power generated worldwide is now being consumed by electric motors. More than 80% of these motors which can be found in fans, pumps, air-conditioning systems, washing machines, refrigerators, elevators, and belt conveyors are electro-mechanically controlled and are being switched on and off in the upper speed range, resulting in more than one half of the energy being lost during the process.”

Approximately 39 million air-conditioning systems and some 80 million refrigerators are being sold every year. For all these appliances, 60% of the energy consumed could be saved by using speed-controlled engines. For the 69 million washing machines sold in the same period, the savings potential is 64%. In the aggregate, the resulting savings amount to $14.5bn in cash each year.

Alexander Lidow: “For energy-efficient power electronics, vast opportunities are being offered by energy-saving drive control architectures. However, as the complexity of motor drive development is continuously increasing and as thousands and thousands of highly specialized skills are required to blend control algorithms with the development of analog circuits and power management, the technical challenge is to make available a high-performance, energy-efficient control system as simply as possible and without affecting end-consumer costs.” 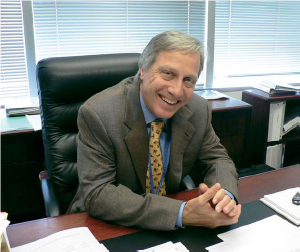