“The foundation of all cost is energy,”

Alex Lidow is CEO and co-founder of Efficient Power Conversion Corporation (EPC). Since 1977 Dr. Lidow has been dedicated to making power conversion more efficient upon the belief that this will reduce the harm to our environment from energy production and consumption. 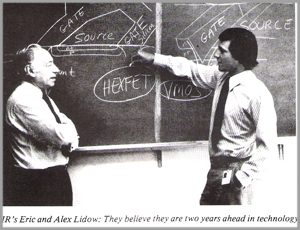 In order to pursue this mission, in 1977 he joined International Rectifier as an R&D engineer. In 1978 he co-invented the
HEXFET power MOSFET, a power transistor that launched the modern power conversion market and displaced the aging bipolar transistor. Royalties from these patents brought in more than $900M over the years, and International Rectifier, prior to being acquired was the largest producer of power MOSFETs in the world. Over the 30 years Dr. Lidow was at IRF, his responsibilities grew. He progressed to the head of R&D, head of manufacturing, head of sales and marketing, and finally CEO for 12 years.

Dr. Lidow holds many patents in power semiconductor technology, including basic patents in power MOSFETs as well as in GaN FETs. He has authored numerous publications on related subjects, and recently co-authored the first textbook on GaN transistors, “GaN Transistors for Efficient Power Conversion”, now in its second edition published by John Wiley and Sons.
In 2004 he was elected to the Engineering Hall of Fame, and in 2005 IRF, under Dr. Lidow’s leadership, International Rectifier was named one of the best managed companies in America by Forbes magazine.

Dr. Lidow was one of the lead representatives of the Semiconductor Industry Association (SIA) for the trade negotiations that resulted in the U.S.-Japan Trade Accord of 1986 and testified to Congress many times on behalf of the industry.

Since 1998 Dr. Lidow has been a member of the Board of Trustees of the California Institute of Technology, and has been the Chairman of the Compensation and Nominating Committees, and Vice Chair of the Investment Committee.

For more about Alex:

The Cost Of Energy Is The Key To Sustainability

Alex Lidow inducted into the ISPSD 2020 Hall of Fame