Adios, silicon: Why exotic designs are the future for the chips in your gadgets

Silicon falls into what the chip industry calls group IV of the periodic table of the elements. One way to keep pushing progress will involve elements drawn from columns to either side of the group IV column — thus the term III-V materials, pronounced simply “three-five.”

With III-V chip manufacturing, all that stays the same — but silicon will get new elements layered on top. That will help electrons flow faster, which means less voltage needed to get them moving. If the chips need less power, then transistors can be smaller and switch faster.

One company betting its future on III-V materials is Efficient Power Conversion, a 34-person startup led by Chief Executive Alex Lidow. EPC already is seeing steady revenue growth from devices that incorporate a III-V layer made of gallium nitride (GaN). In 2016 or 2017 he expects to adapt the gallium nitride manufacturing process to work for the logic circuits that do the thinking in computer processors. Because of gallium nitride’s electrical properties, “you immediately get a thousand times potential in improvement” over conventional silicon, he said. 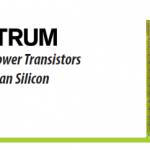