Why gallium nitride is ‘6,000 times better’ than silicon

Silicon — the core ingredient in semiconductors and the driving force behind the electronics industry — is reaching its limit, says Alex Lidow, CEO of Efficient Power Conversion Corporation. His Los Angeles-based company is investigating the capacity of gallium nitride (GaN) to disrupt the $400 billion (£277bn) silicon industry with its improved powers of semiconducting. “This is the first  time that there is a semiconductor that is both lower cost and has a higher performance than silicon,” Lidow says. 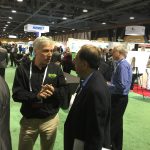